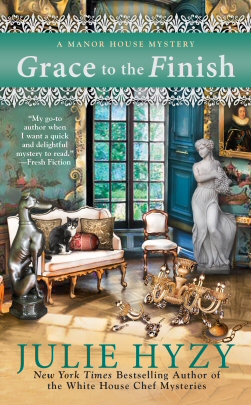 Grace to the Finish

Now that Grace Wheaton has officially been named heir to Bennett Marshfield’s fortune, her usually busy schedule has become a juggling act. In addition to her duties at Marshfield Manor, she’s bankrolling her roommates’ refurbished wine shop, Amethyst Cellars. Grace is excited to check out the rustic space with Bruce and Scott. But that excitement turns to dismay when they stumble upon the body of the banker involved with the sale.

Grace wants to get to the bottom of this mystery quickly so that her friends’ new venture isn’t overshadowed by an unsolved murder, but she’s got even more to balance when her troubled sister, Liza, is released from prison early. Liza’s first stop is Marshfield Manor and her first priority is grabbing a bite of Bennett’s fortune for herself. Grace has to keep her greedy sister at bay and catch a killer before her new life comes crashing down around her. 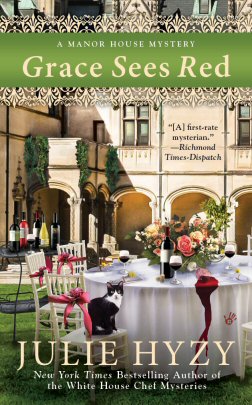 Grace Wheaton, curator and manager of Marshfield Manor, and her benefactor, Bennett Marshfield, are discussing how to help her roommates Bruce and Scott with their wine shop troubles when Grace’s trusted—if testy—assistant, Frances, calls, saying she needs some assistance of her own. Arriving at the address Frances has given them, they find a coroner’s van and police cars parked outside an upscale assisted-living facility called Indwell.

One of the elderly residents has been found dead under suspicious circumstances, and Frances, seen arguing with the man earlier that day, is now a person of interest. It’s up to Grace to clear her assistant’s name and find the real killer—before another Indwell resident checks out early… 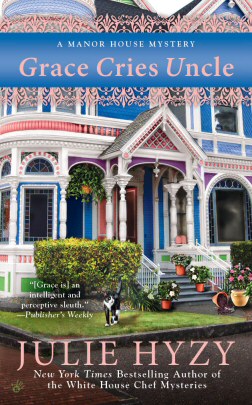 When Grace’s estranged sister Liza shows up on her doorstep, the timing couldn’t be worse. Grace’s beloved boss and benefactor, Bennett Marshfield, has finally gotten her to agree to a DNA test to establish if he is, in fact, her uncle. If so, Grace would move from being the trusted curator and manager of Marshfield Manor to Bennett’s heir. And her duplicitous sister would be right behind her in the line of inheritance.

Liza is not the only mysterious visitor to arrive in town. A man claiming to be an FBI agent has shown up, and a swarm of avaricious antique collectors have descended on Emberstowne for a prestigious convention. When Bennett reveals he’s in mind to acquire a secret antique and the FBI agent turns up dead, the plot thickens. And Grace can’t help but wonder if Liza is at the center of it all… 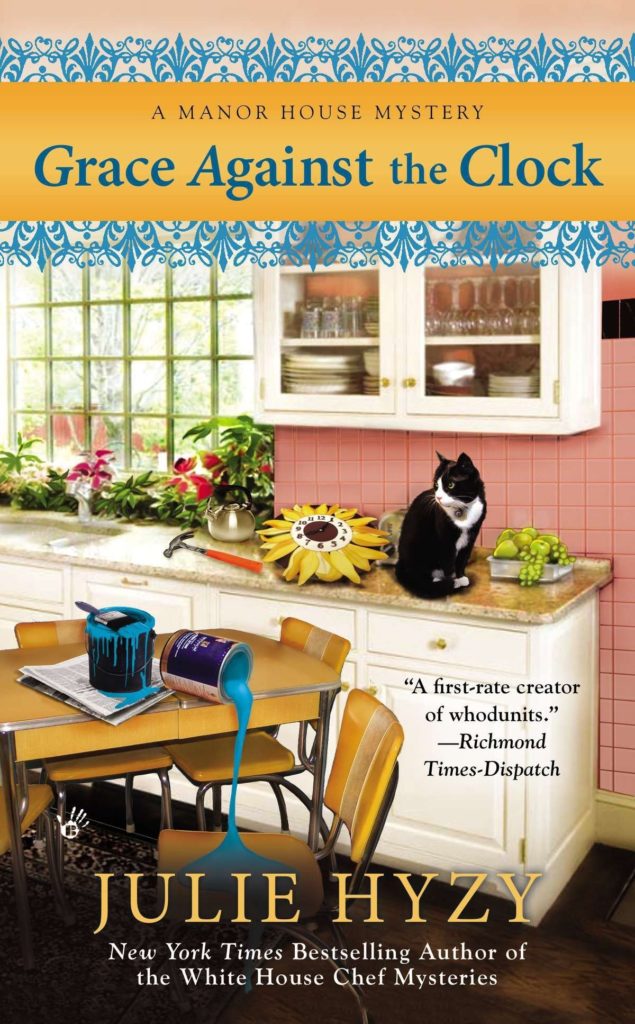 Grace Against the Clock

When Marshfield Manor hosts a charity event, Grace Wheaton, the mansion’s curator and manager, is happy to lend a helping hand—until a killer makes an unwanted donation…

With the town clock in desperate need of repair, local lawyer Joyce Swedburg and her ex-husband, Dr. Leland Keay, are trying to put their differences aside to organize a benefit at Marshfield Manor to raise money to restore the beautiful timepiece. While Grace appreciates the opportunity to support such a good cause, the tension between the unhappy exes is giving her the urge to put both of the organizers in time out.

But after Leland collapses on stage during the festivities, poisoned, Grace suspects there was more going on behind the scenes. Now, she’s in a race to catch a ticked off murderer, and, if she’s going to prevent anyone else from getting hurt, every second will count… 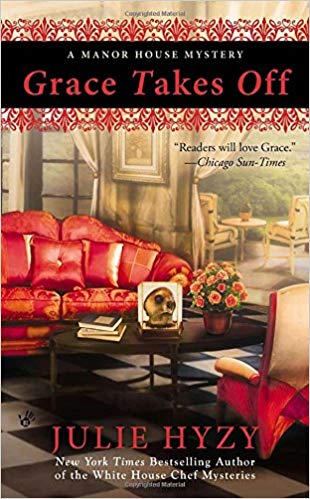 A trip to Italy’s Tuscan countryside is a dream come true for curator and manager of Marshfield Manor, Grace Wheaton. At least until her boss—and benefactor of this whirlwind excursion—becomes the target of a murderer…

When Grace and her boss, Bennett Marshfield, turn up at the Italian villa of one of his oldest friends, they’re troubled to discover that most of his friend’s impressive art collection—including a prized bronze skull crafted by Picasso—is fake. Someone has been selling the real deals and replacing them with skilled forgeries.

Unfortunately, Grace and Bennett have to fly home the next day, so there’s no time to investigate. But their troubles are hardly over. On the plane, Grace catches a woman trying to poison Bennett. The woman, of course, isn’t talking, but by the end of the flight, there are two dead bodies. Now Grace has to wing it to find a mile-high murderer—especially since she suspects Bennett is still in danger… 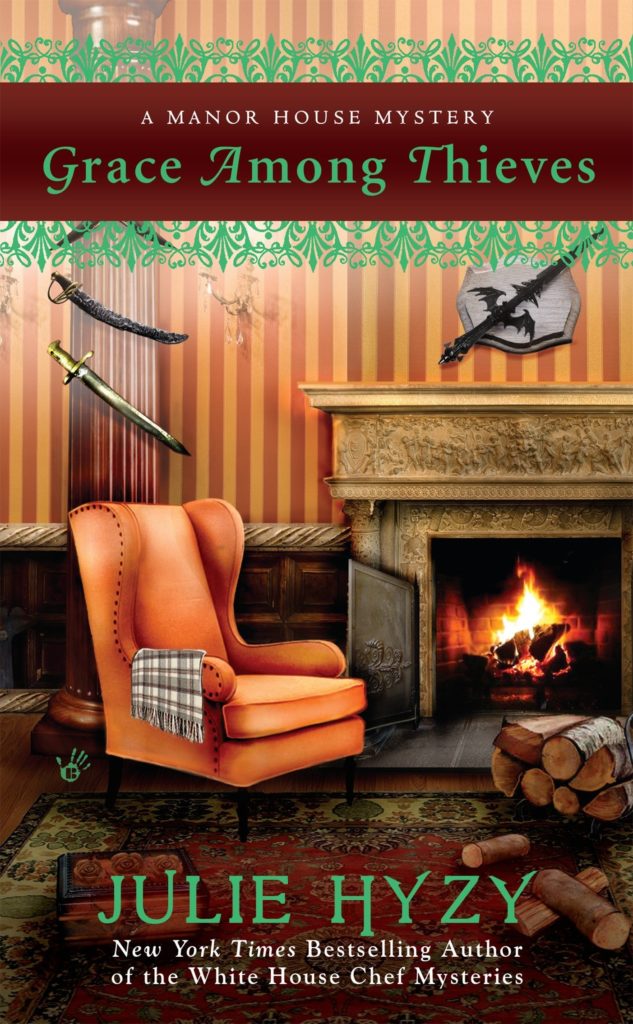 When Grace’s former professor calls to warn her that there has been a rash of thefts at various historical sites, Grace isn’t surprised — because Marshfield Manor has been targeted, too. She starts to wonder if it has something to do with the film crew roaming the grounds, digitally immortalizing the manor, but then she gets distracted by an incident much more dire: the shooting of one guest and the murder of another.

Grace does her best not to go looking for trouble, but with a murderer on the loose, she can’t leave the dirty work to the cops — especially since the killer still seems to be lurking around town, waiting to finish the job of making Grace history… 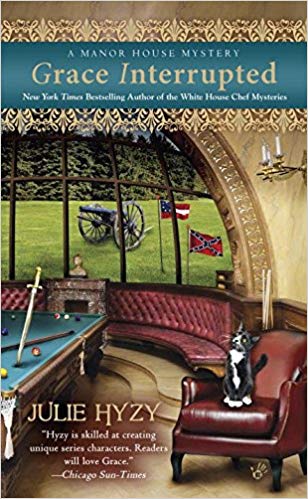 Civil war re-enactors have set up camp on the grounds of Marshfield Manor. The group is very believable, especially when the unrest spills out of the barracks and inside the sumptuous mansion. Grace manages to settle a minor squabble, but loses the war when actor Zachary Kincade is found stabbed to death.

Jack Embers, the groundskeeper, falls under suspicion when he’s linked to the death of Zachary’s brother years ago. But there were others out for Zachary, actors who can be very convincing when the coveted role of “General” is on the line. Grace feels responsible for finding the murderer…and for the sweet tuxedo kitten found on her doorstep, Bootsie. Can she come to the rescue of her friends without putting herself in danger’s way? 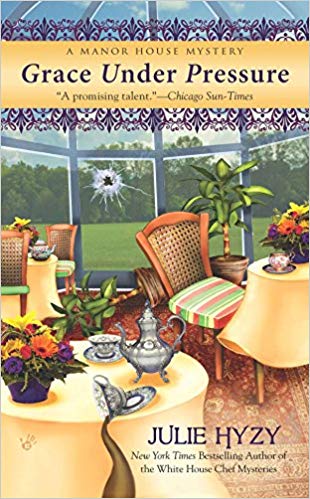 Everyone wants a piece of millionaire Bennett Marshfield, owner of Marshfield Manor, but now it’s up to new curator Grace Wheaton and handsome groundskeeper Jack Embers to protect dear old Marshfield. But to do this, they’ll have to investigate a botched Ponzi scheme, some torrid Wheaton family secrets — and sour grapes out for revenge.