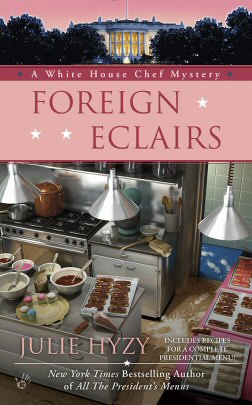 White House executive chef Ollie Paras has served plenty of meals to foreign dignitaries from around the world. But someone is ready to serve her an ice-cold dish of revenge…

Things are about to really heat up for Ollie. News of a bombing and attempted breakout at a federal prison reveals that the brother of a terrorist she helped defeat is back with a vengeance. And after she gets mugged on her way home from work, the Secret Service won’t leave her side, fearing she is now a target.

When a White House staff member is murdered, officials rush to action over a possible security breach. It may be time for Ollie to trade in her apron for a bullet-proof vest as she becomes part of a bold strategy to make sure this terrorist gets his just desserts.. 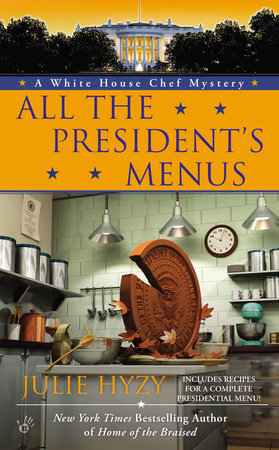 All The President’s Menus

It’s an old adage that too many cooks spoil the broth. But when a tour of the White House kitchen by a group of foreign chefs ends in murder, it’s Olivia Paras who finds herself in the soup…

Due to a government sequester, entertaining at the White House has been severely curtailed. So executive chef Olivia Paras is delighted to hear that plans are still on to welcome a presidential candidate from the country of Saardisca—the first woman to run for office—and four of that nation’s top chefs.

But while leading the chefs on a kitchen tour, pastry chef Marcel passes out suddenly—and later claims he was drugged. When one of the visiting chefs collapses and dies, it’s clear someone has infiltrated the White House with ill intent. Could it be an anti-Saardiscan zealot? Is the candidate a target? Are the foreign chefs keeping more than their recipes a secret? Once again, Olivia must make sleuthing the special of the day… 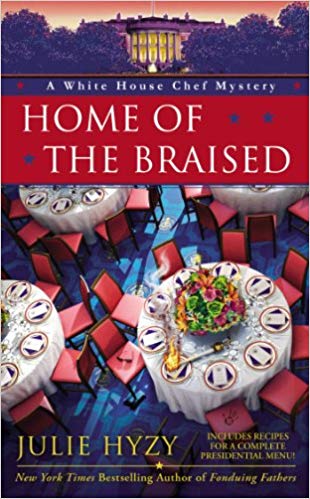 Home of the Braised

With the pressure of an upcoming state dinner that could make or break the president’s foreign policy, White House executive chef Olivia Paras has precious little time to focus on her wedding plans—or to catch a murderer…

Tensions are running high as the White House staff adjusts to a new chief usher and prepares for a high-stakes state dinner, where everything must be perfect. But as the date for the event approaches, things go disastrously wrong when the secretary of defense is found dead in his home, seemingly killed during a break-in.

At the same time Olivia’s fiancé, Gav, is looking into the mysterious murder of an old friend. Is there a connection? Despite an increase in security following the secretary’s death, Ollie learns the president is in imminent danger at the dinner and must do everything in her power to get to him—before it’s too late… 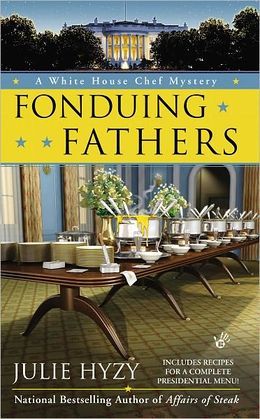 White House executive chef Olivia Paras has enough on her plate. But after gaining new information about her father’s death, the First Family isn’t the only family Olivia is concerned about…

Olivia has always believed that her father was an honorable man—until a trip to visit her mother reveals that he was dishonorably discharged from the army. Olivia is even more shocked to learn that he was brutally murdered because someone at his company suspected him of selling corporate secrets. Refusing to believe that her father was a scoundrel, Olivia won’t rest until she proves his innocence.

Enlisting the help of her boyfriend, Gav, Olivia must reach out to her father’s colleagues to discover the truth behind his murder. What she’s about to discover may not only put her at risk, but threaten national security as well… 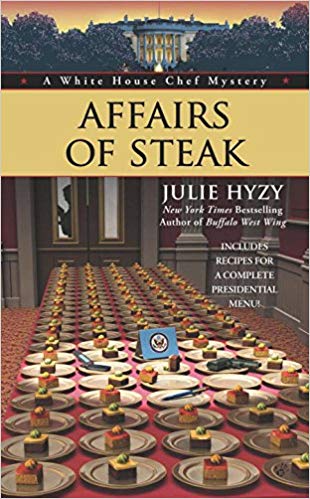 Olivia and her arch nemesis, White House Sensitivity Director Peter Everett Sargeant, must work together to solve the double murder of one of the First Lady’s assistants and the Chief of Staff — before they become the next victims of a merciless assassin with a secret agenda. 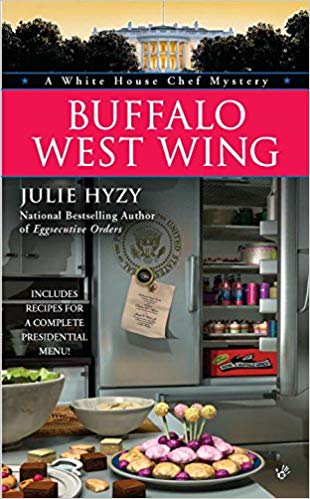 With a new First Family, White House executive chef Olivia Paras can’t afford to make any mistakes. But when a box of take-out chicken mysteriously shows up for the First Kids, she soon finds herself in a “no-wing” situation. After Olivia refuses to serve the chicken, the First Lady gives her the cold shoulder. But when it turns out to be poisoned poultry, Olivia realizes the kids are true targets. 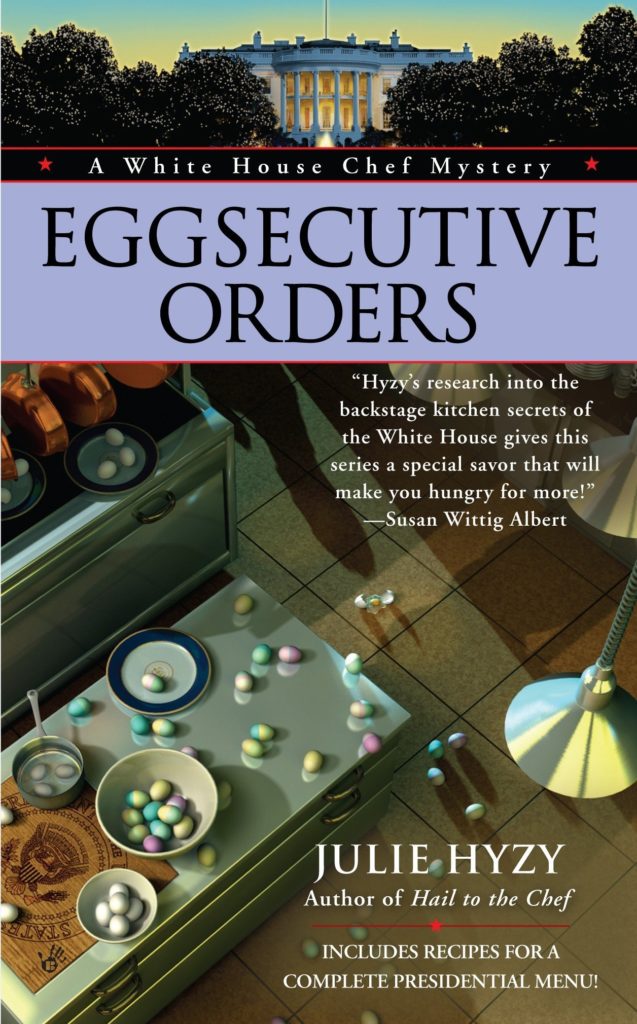 Ollie’s mom and grandmother have flown out to D.C. for the annual Easter Egg Roll and a personal tour of the White House. But plans are scrambled when executive chef Ollie is banished from the kitchen after one of the president’s guests dies at the dinner table. Who killed Carl Minkus? Ollie is at odds with her Secret Service boyfriend, Tom, who has been charged with making sure his intrepid girlfriend keeps her nose out of official business this time. But Ollie is determined to restore her reputation. Will proving her innocence mean the end of a relationship with Tom? 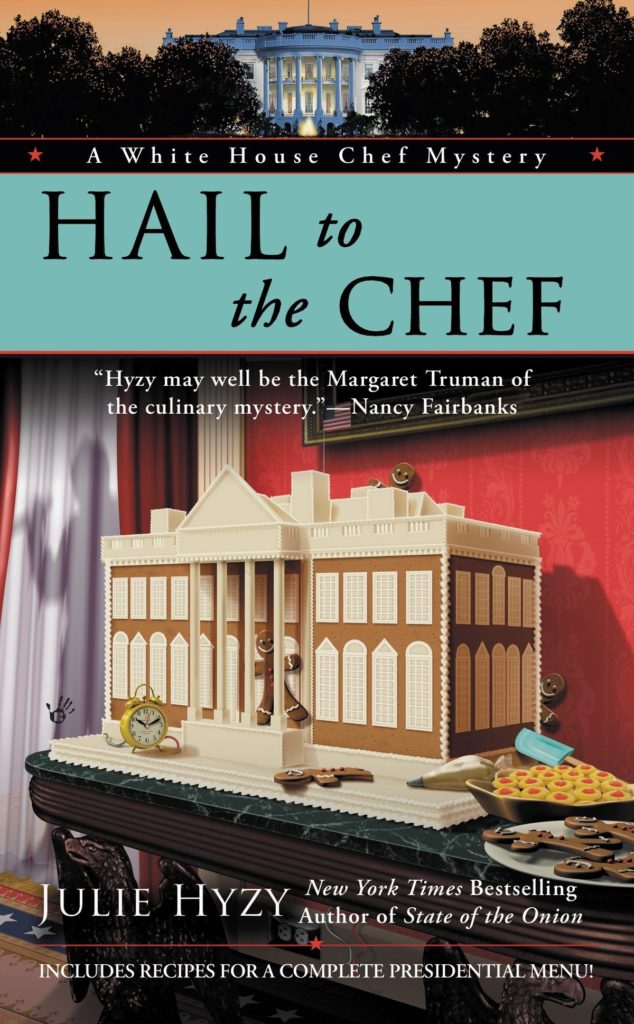 Hail to the Chef

White House executive Chef Ollie Paras has a lot on her plate, what with holiday meals to map out, the First Lady’s matchmaking plans to deflect, safety classes to take, and terrorist plots to avoid. Oh, and a senator’s assistant has been begging Ollie to rig the countrywide gingerbread-man-decorating contest in favor of the senator’s kids …

Then a cautious, kindly electrician is electrocuted, and the First Lady’s nephew doesn’t show up for an important event when not twenty-four hours before he was happily cleaning shrimp with Ollie. Ollie suspects there’s something going on that’s fishier than shrimp cocktail. Now, she’ll have to watch her back — and find a killer unlikely to be pardoned … 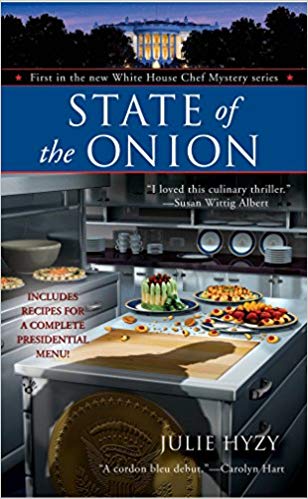 State of the Onion

Never let them see you sweat — that’s White House Assistant Chef Olivia Paras’s motto, which is pretty hard to honor in the most important kitchen in the world. She’s hell-bent on earning her dream job, Executive Chef. There’s just one thing: her nemesis is vying for it, too. Well, that and the fact that an elusive assassin wants to see her fry…

The highly-trained Secret Service agents couldn’t do it. Snipers swarming the White House grounds were no help. Only Ollie Paras was able to stop the intruder-hitting him with a frying pan. She’d like to wash her hands of the whole thing, but after she witnesses a murder, there’s no going back…

Ollie’s Secret Service boyfriend warns her that the killer is a world-class assassin. And Ollie’s the only person alive who can recognize him. Still, guilt propels her to investigate, even if it means putting herself — and her relationship-in hot water…

“I loved this culinary thriller: topical, timely, intriguing. Julie Hyzy simmers a unique setting, strong characters, sharp conflict, and snappy plotting into a peppery blend that packs an unusual wallop. Hyzy’s research into the backstage kitchen secrets of the White House gives this series a special savor that will make you hungry for more.”
—Susan Wittig Albert, national bestselling author of Nightshade

“The pulse-pounding action, appealing heroine, and inner workings of the White House kitchen combine for a stellar adventure in Julie Hyzy’s delightful State of the Onion.”
—Carolyn Hart, author of Dead Days of Summer